This one's shiny, alright!  It was a challenge (as I'm sure anyone else who used acetate discovered) photographing the card so that you could see the shine, but not the reflection of me, the window, the door, anything that was near. 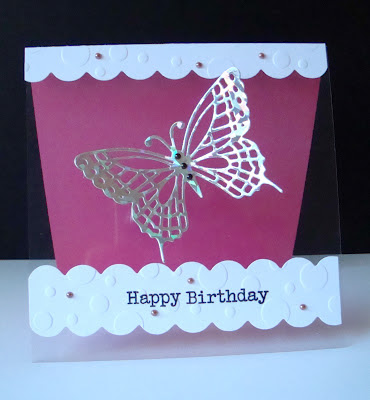 Here's a side view 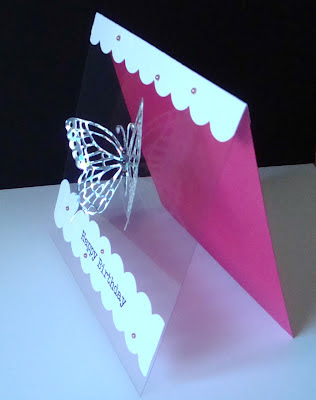 A 6x6 acetate card and 6x6 pearlised pink card were halved, then spliced with a strip of dotty border which has been folded over (all from Craftwork Cards).  I then added a strip of unfolded dotty border to the lower portion of the acetate.
Stamp by Woodware FRCL004 His Birthday (I've used that quite a lot lately, mainly because it was still on the acrylic block.  I've now put it away, so you can look forward to some different sentiments on future card posts).
Butterfly is Marianne Creatables LR0115 cut from holographic card.
Self-adhesive pearls

Pop back tomorrow when I'll post my feeble attempts to Play Along with Gallery Idol.  It'll have you snorting with derisive laughter or nodding with empathy.