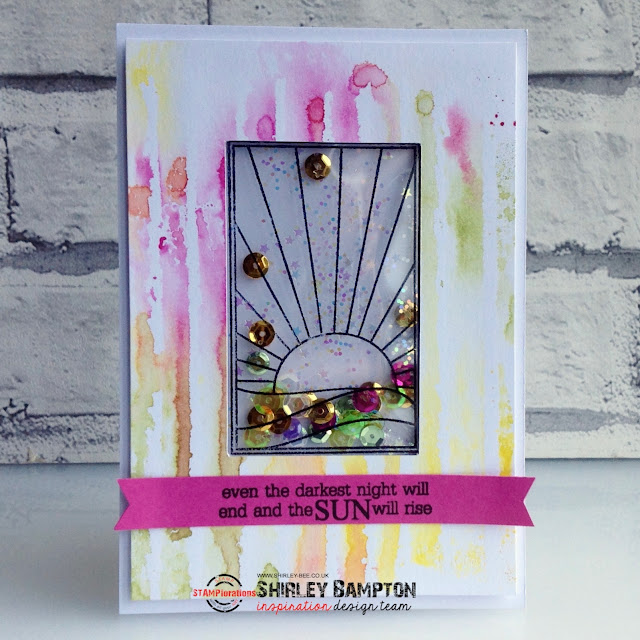 And the reason I've been making them is because I've rigged up a "fuse tool" DIY style.  I've been umming and aaaing whether to get a Fuse Tool.  I'm a sucker for gadgets, but would I actually use a Fuse Tool enough? (That tiny little detail doesn't usually stop me.)

So I watched the promotional video, and thought that it just looked like a soldering iron with a different attachment.  Hang on - I've got a soldering iron in the attic (told you I was a sucker for gadgets).  I also have a Pergamano perforating tool but unfortunately the shaft is too big to fit the soldering iron.  So I compromised by using the conical soldering tip and a dotting action, and an ordinary steel ruler.  Which works, as long as you're encasing the shaker pouch so that the sealed borders aren't showing - they aren't quite as neat and pretty as the real deal, but otherwise you wouldn't know the difference.  Anyway, on to the card.

I had this panel in my stash (embossing folder and Distress Ink printing à la Tim Holtz).  I stamped the sunrise image from Deepti's new set, New Beginning, in Versafine Smoky Grey, cut the image out and used that on this card last week.

I stamped the image on acetate using Staz On black, laid it onto another acetate panel, fused three sides, filled with sequins and stardust, fused the final side then attached the shaker pouch to the back of the cutout panel, then attached it to the front of the card.

Pop on over to the STAMPlorations blog for some more fabulous inspiration from the team, and don't forget to leave a comment while you're there for a chance to win in a random prize draw.

Email ThisBlogThis!Share to TwitterShare to FacebookShare to Pinterest
Labels: Stamplorations