Oh, Dear, What Can The Matter Be?

...
This old lady was locked in the lavatory
I was there for two hours actually
Nobody knew I was there.

But before I tell you about that, a card.  I'm playing along with Darnell's 5th blogaversary NBUS party, where the prompt is twofold: use some NBUS, and coloured pencils on kraft. 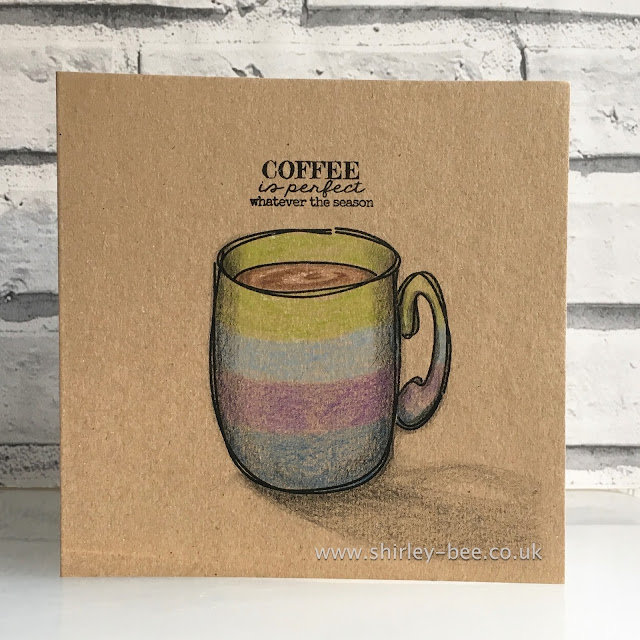 My NBUS stamps are The Bee's Knees Winter Mug and Shery's Coffee For All Seasons.  These were released in November, but because I was away I didn't get to play with them until now.

So.  Back to the bog.  DH was going out to do a bit of shopping and take the dog for a walk.  I'd gone into the bathroom, and as I turned the door handle to come out, the spring broke, and the handle was turning nothing.  I climbed on the bath to shout out of the window only to hear the car driving off.  B*gger!  So I emptied the bathroom cupboard looking for anything that I could improvise with, but surprisingly there were no screwdrivers, lock picks or hammers in there.  DH could be gone for a couple of hours, so I cleaned out the now empty cupboard and sorted the contents.  Did some exercises.  Cleaned a bit more.  More exercises.  Only half an hour had passed....  Fortunately for me, Florence isn't too good on her pins right now, so DH was back fairly soon.

B*gger again!  I'd just thought it would open from the other side.  Cue tool box, shoving screwdrivers under door, sliding credit cards down door frame, resorting to big hammer.  During all this:

DH:  Well, I had my mobile on me, you should have rung.

Currently there is no handle on the door, but there is a screwdriver in the cupboard.

I wouldn't care, but this is the second time it's happened to me.  A few years ago we were in Thailand, we'd checked out of the hotel earlier, but used the shower facilities before our journey to the airport.  DH went first while I sat with the hand luggage, then I went.  There was a changing room and separate shower room, so I got undressed, showered, went back to the changing room, and it had locked me out.  There was an English lady drying her husband's underpants under the hand dryer (I kid you not) and she offered to get the receptionist to sort it out, but there was obviously a language problem (or she'd run off laughing, not sure which) and nobody came.  So out I go into the hotel lobby, draped in two towels, trying to attract DH's attention.  I certainly attracted attention, but it took a while to get DH to look at me ;)  Eventually one of the hotel porters was sent around the back with a ladder to climb through the changing room window and unlock it from the inside.  Meanwhile, another porter had loaded our bags onto the wrong minibus, and our suitcases were already on their way to the airport... fortunately I had my change of clothes in the hand luggage.  Then, when I got to the airport, I went to the loo and realised I had my knickers on inside out.  But there was no way I was jinxing things and changing them!!!

Too much information??
Posted by shirley-bee at 18:17