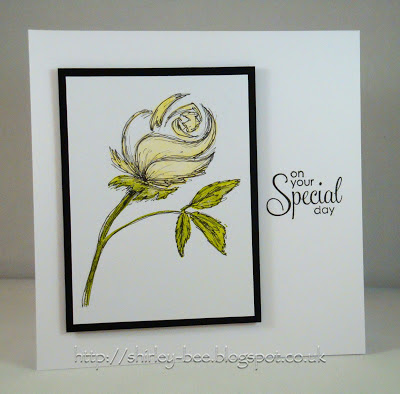 This is the same rose stamp that I used in this post.

When I first got it (in my post-Christmas bargain trolley-dash) I coloured directly onto the stamp with markers, because it's a solid image.  I tried several colour combos, the first of which was two shades of pale yellow.  But they didn't stand out enough, so I moved on to peaches, pinks and reds.  But I didn't want to throw away the yellow version until I'd had a think about it.  So I thunk, and decided that I would draw a fine outline around it to highlight the areas.  But that didn't look too good, so I kept on with the pen, over-scribbling the original lines I'd drawn.  I quite like how it's ended up.

As a reminder, here's what it looks like (in the various colour combos, and complete with spritzed droplets) when using the direct to stamp technique. 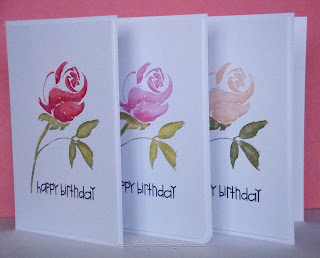 So I shall be looking at all of my solid image stamps in a different light now.  Try it.

Anyway, I'm entering the yellow version into a new (for me) challenge, Addicted to Stamps and More (with a name like that, I should have been in from Day One).  The theme is NATURE.

Stamps are Penny Black 2815K The Look of Love, sentiment is from 30-105 Gratitude.
The fineliner I used was a Staedtler Pigment Liner 0.05.
Posted by shirley-bee at 18:01

Email ThisBlogThis!Share to TwitterShare to FacebookShare to Pinterest
Labels: Addicted to Stamps and More, Penny Black